The firm launched Dent’s pupillage in October 2015 with St John’s Buildings with a view to her joining the firm as a barrister once she had completed her training. The partnership was the brainchild of CEO Karen Jackson.

“Following Catherine’s experience at one of the leading chambers in the UK, she brings a new and valuable skill set to our specialist industrial disease solicitors,” said Jackson.

“Having in-house counsel will allow for speedy communication and early preparation in cases, which is a great benefit to our clients. The pupillage is the latest in a series of new roles aimed at making the most of the multitude of abilities within the firm. We offer a wide variety of roles to suit everyone’s talents and this is just another route employees can take.” 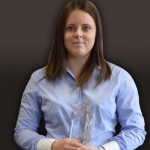 Dent’s pupil supervisor for the 12-month qualification period was St John’s Building’s barrister, Philip Grundy. The first six months of the course saw her assisting Grundy and undertaking work on his behalf. The last six months of her pupillage saw her take on her own work whilst still being supervised by Grundy.

“I was extremely fortunate to have benefitted from such a knowledgeable and experienced pupil master,” said Dent.

“I am looking forward to putting the skills I have learned into practice at Roberts Jackson.”