Fox qualified first as a doctor at Charing Cross and Westminster Medical School and worked in the UK, New Zealand and Central Africa. His experience included casualty, terminal care, neurosurgery and treating casualties from the Mozambique civil war. He then retrained in law and was called to the Bar in 1994.

He undertook his pupillage and early junior career at Exchange Chambers before relocating to the south of England in 1999. He developed a national practice as a specialist clinical negligence practitioner and was awarded silk in 2016. He joined No.5 Chambers in 2004 and will remain a full member of the set.

“Having taken silk last year, there is no better place than Exchange Chambers to develop my clinical negligence practice in the North,” said Fox. 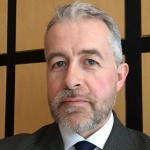 “Having started my career at Exchange and maintained my links with it over the last 20 years, I know just how outstanding the quality of their clinical negligence team is. I am very much looking forward to becoming a part of it”.

Bill Braithwaite QC, head of Exchange Chambers, said: “Having led Simon in a number of high value, complex claims over the years, I am delighted he has joined our clinical negligence team.

“Simon’s recent appointment as a silk accurately reflects the quality of his practice. He is an outstanding barrister.”