It’s not everyday you see an email from your CEO asking for applicants to take part in the iconic Gumball 3000 rally.

The event, now in its 19th year, is unique. It involves 150 of the most impressive supercars you’re ever likely to see, driven over 3,000 miles in a week, by an eclectic mix of motoring enthusiasts. It is a riot of colour, razzmatazz, music and fashion, with a few celebrities sprinkled in for good measure.

“When I saw it, my eyes lit up,” says Matthew Gray, a motor claims specialist based in ERS’s Swansea office.

For self-proclaimed petrol head Gray, this was a chance of a lifetime and he grabbed it with both hands. “I just thought, this is me!” recalls Gray, who has been with the specialist motor insurer for eight years.

ERS had been approached by the broker PK Partnership to underwrite the motor policies for the famous rally at the start of the year. As experts in the prestige market, well known for looking at the individual merits of a situation, rather than taking a broad-brush approach, they were the ideal insurer to partner with.

At first Gumball looked like the world’s scariest risk. It involves extremely high-value vehicles driving through different countries with a heightened risk of cars breaking down or crashing. However, being used to looking at the individual risk aspects, ERS recognised that, on an individual basis, it would already be comfortable writing a policy for every participating driver and vehicle in Gumball. Through careful research and calculations, ERS created a comprehensive policy that worked for drivers, the organisers and themselves.

To really get under the skin of the event, ERS took the brave decision to enter their own car into the rally, something no insurer had ever done before.

ERS sales director, Alex Hardy and motoring journalist and car enthusiast, Jonny Smith were the co-drivers for Team ERS, in a classic Ferrari 430 Spider. Along the way, they captured the joys and challenges of their journey in a series of irreverent video shorts.

In order to create a fully comprehensive service to the broker, their customers and Gumball’s organisers, ERS decided that a claims expert should be physically present at the rally, and for its duration, to offer immediate assistance should there be any incidents. They wanted someone with the necessary experience, who could be calm under pressure and think clearly in a crisis. They also wanted someone who would relish the opportunity, could work well in a team and had bundles of energy and enthusiasm. Gray fitted the bill perfectly.

“I couldn’t believe it when I was chosen,” admits Gray. “I was in shock, it was like winning the lottery.”

His primary role during the rally would be to gather evidence and provide support, should any accidents occur. “Resolving claims is so much easier and quicker if we have the right details collected early on. This means taking the right pictures, talking to witnesses and getting a clear idea of what happened while it’s fresh in people’s minds.”

His other very important job was to drive the company’s support vehicle, a Land Rover Discovery, which also carried a film crew to document Team ERS’s journey.

As a result, Gray drove most of the 3,000 miles of the rally too – a mentally draining and physically demanding experience, which involved driving ten or more hours every day.

“I didn’t expect it to be quite such an emotional rollercoaster,” he confesses. “There were some incredible highs, like travelling through the breath-taking Croatian countryside, but also some real lows, in particular on Day 2, when I hit the wall and just craved sleep and being on my own.”

Given that ERS was part of the grid alongside PK Partnership, the insurer was a very recognisable sight and many of the other competitors approached Gray and the team to find out more about what they were doing.

“They were very impressed that ERS was taking the time and effort to really understand them and were so committed to the event”, he says. It was also very important that Gray was easy to find, just in case he was needed and he carried two phones with him at all times, to ensure that he could be contacted if he was required.

The incident that most sticks in his mind is his own team’s misfortune.

Just as they were entering Athens and were a few kilometres from the grid, the front tyre on the Team ERS Ferrari blew. It was 2 a.m. in the morning and standard procedure would have been to organise a tow to the grid, through ERS’s European Recovery Network. However, having driven thousands of miles over the previous few days, the team were determined to get to the grid under their own steam.

A local man, Theodore, who’d been following Gumball on the Internet came to their rescue and helped them source and fit the tyre through a nearby supplier. 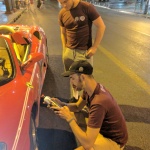 Dealing with a flat tyre at 2 a.m.

So, would Matthew take on Gumball again?

“Definitely, I’d go tomorrow,” he says. “We had a phenomenal team, who worked brilliantly together. I’m really proud to work for an organisation that is prepared to take on challenges like this and commit fully to them.

“We underwrote the rally participants, drove in it and documented the whole experience so that others could see what an undertaking it was. I think the videos we produced were amazing, especially as much of the editing took place in the back of the Discovery, going across some of the bumpiest roads I’ve ever experienced! ERS and Gumball are a perfect combination, with an event that is all about a passion for driving and taking that to new levels.

“If we do it again next year, my name will be first on the list!”

To find out more about Matthew Gray and Team ERS’s adventure visit their site here.