Two men have been sentenced for a total of 10-and-a-half years at The Inner London Crown Court for staging crash-for-cash collisions and running them through bogus claims management companies (CMCs).

Sajid Rasheed, 49, from West Drayton and Lutfullah Lutfullah, 32, from Slough, were investigated for three years by the City of London Police’s Insurance Fraud Enforcement Department (IFED).

Rasheed was the main organiser but conspired with others to ensure that the fraudulent claims would be successful.

Rasheed ran two fraudulent CMCs called Britain Claim Services and Briton Rentals UK. Both companies referred personal injury, hire, and vehicle damage claims to solicitors firms. With the help of Lutfullah, Rasheed would plan road traffic collisions, which he would then refer to solicitors’ firms to receive a fee.

Lutfullah would stage the accidents against members of the public and provide Rasheed with the insurance details which they could pass to solicitors’ firms to start a claim. Rasheed duped a doctor registered with the General Medical Council to validate the personal injury claims that he submitted.

The offending started on 26 February 2013 when an accident took place on the A316. Subsequent claims were made for four people in the car and were referred to SBM solicitors by Britain Claim Services. All four claimants submitted medical reports. The insurer disputed some of the claims and investigation was conducted which found that a number of the claims had been fabricated and the passengers who were claiming to be injured were not actually in the car at the time of the accident. 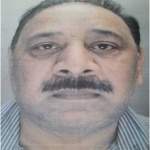 DC Haywood, who led the case for the City of London Police’s Insurance Fraud Enforcement Department (IFED), said: “This group of criminals worked together with no consideration for the consequences of their actions. They placed financial gain above the safety and wellbeing of other motorists and pedestrians.  Not only could they have caused serious injury or worse to other road users, they could have caused financial harm to the insurance industry, driving up the cost of insurance premiums to innocent motorists.

“Sajid Rasheed was sentenced today in his absence as he absconded whilst he was on trial and has failed to attend court. Rasheed is now wanted by the police and we urge anyone who knows of his whereabouts or has any information about him to contact us immediately by calling 101 or contacting Crimestoppers anonymously on 0800 555 111.”