Caseloads have grown from 8,041 to 8,385 over the same period at the Manchester-based personal injury law firm. Last year the firm secured a £17 million funding deal with the Royal Bank of Scotland. It says that it now believes that it is making good progress towards reaching its goal of a £20 million turnover within five years.

The firm’s growth is also due to its increased marketing spend, which saw some £4.7 million committed in television and radio advertising campaigns during the current year.

Express Solicitors has also grown from 187 employees to 198, including 78 fee earners and 22 partners, largely by training, developing and promoting from within.

Managing partner James Maxey (pictured below) said: “Our ability to grow in this tough sector is down to our skilled, dedicated and compassionate team of lawyers and other staff who remain fully committed to getting injured people the justice they deserve.” 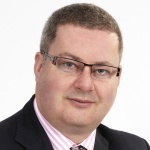