The scale of the pandemic on loss adjusting has been laid bare after Woodgate & Clark reported a 2,300% increase in the number of business interruption claims it dealt with between March 2020 and February 2021.

Julie Groves (pictured), head of the business interruption claims unit at Woodgate & Clark, said the huge increase in cases was a game changer for loss adjusting, driving significant changes to how the company navigated its way through the surge, and providing the industry with plenty of learnings for the future.

“We have worked our way through 75% of the caseload and expect to have completed the majority of this process by the end of the summer,” Groves said. “Dealing with this has been a massive challenge and an incredible learning experience for us all.”

She added: “Of course, business interruption is additional to the recent flooding, and other perils we have managed on behalf of our clients.

Between February 2019 and March 2020, Woodgate & Clark handled 259 business interruption claims. The company’s caseload shot up to nearly 6,000 during the subsequent 12-month period, with the majority being Covid-related claims. 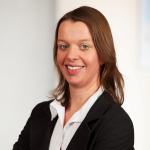 Groves, who joined Woodgate & Clark in February this year, said: “Our approach, which sees each case assigned to a named adjuster who follows the case through from start to finish, has proved to be the best way to work through the cases from a customer perspective as well as the insurers.”

“Policyholders feel looked after; they can ask questions and get the right information from a real person, which makes sense because these are complex claims, especially as we’ve needed to navigate our way and develop procedures not just with insurers but with their legal teams as well.”

She explained that the high profile of business interruption has led to much more involvement from lawyers, unlike most claims, but “legal input has been an important factor in helping to apply the Supreme Court judgement to each policy”.

Groves added: “The Supreme Court judgement back in January was essential in breaking the logjam, and now, following the publication in July of the declaration (a protocol between the Financial Conduct Authority and the insurers which sets out how the Supreme Court judgement is interpreted), the industry has been able to clarify certain outstanding policy wordings, which will lead to more cases being settled.”

The priority has been small and medium-sized enterprises (SMEs), however, because “they have less financial resilience than big corporations, who have their own insurance departments making claims all the time. For SMEs, the business interruption claim may be the first they’ve ever made, and they have tended to need the money quickly and needed the most support.”

Groves said that contrary to some industry fears, cases referred to the fraud unit have been less than 3%.

She said: “We haven’t seen much incidence of fraud in business interruption, not least because there has been a lot of support from the authorities by way of grants and loans to businesses (such as CBILS) and those have been much more susceptible to fraud than insurance claims.”

‘Business interruption needs to be properly explained to policyholders’

Turning to the lessons learned, Groves said that while the pandemic is “far from over, at least for us, it was already clear business interruption needs to be properly explained to policyholders when they take it out”.

“Business interruption is usually sold as a bolt on and park of a packaged policy that is not understood and not explained to customers by the insurer or the broker. And the broker probably didn’t know whether their client was covered or not.”

She added: “In the event, adjusters have found themselves at the sharp end of explaining what policies do cover or not. That lack of clarity has not only required the input of the Supreme Court but has damaged the reputation of our industry too.”

Groves concluded: “I am hugely proud of our adjusting team. We have shown how good our core business interruption claims proposition is by dealing successfully with a large volume of claims at a high level of competence.”