Claims Media recently spoke to Mark Stirrup, the managing director of Corporé and The Treatment Network, about how the businesses have turned a corner since being taken over by Speed Medical’s parent company FL 360

At the start of 2016, Corporé and The Treatment Network were in a bad way.

The rehabilitation operators had been working as one company for almost two years but were being dragged down by poor control processes, ineffective IT systems and a crippling supply chain cost base. In short, they were running out of cash.

It had all started out so well. Corpore was launched (without the acute accent over the last ‘e’) by Cunningham Lindsey as a rehabilitation and absence management business back in 2005. Seven years earlier, Jonathan Cook, an eminent chiropractor, set up The Treatment Network as a treatment and diagnostics provider. Both businesses flourished for a number of years, acting as a one-stop shop for insurers looking for reliable rehabilitation services.

Then, in 2014, Cunningham Lindsey sold Corpore to The Treatment Network. And trouble began to brew. Despite the two businesses appearing to be a great fit – with similar and common clients, a large presence across the country, and high-level expertise – day-to-day operations soon began to suffer from internal inefficiencies. A power struggle at the top, which ended up with Cook being pushed out of the business by a corporate putsch, did not help matters either.

Salvation came two years later in the form of Speed Medical’s parent, FL 360. The group bought the business and immediately got to work on turning its fortunes around.

Phase one of the transformation involved an immediate cash injection and the parachuting in of some senior management from FL 360. This provided some stability as operational processes were overhauled. Cook was also brought back into the fold in order to manage long-standing relationships with clients. And to mark a break with the past, Corporé and The Treatment Network were split up into two separate brands and given a significant makeover.

Charged with rebranding the businesses, Niki Proctor, the group’s head of marketing, started from scratch. She reached out to employees, the senior management team and clients to get a feel for what the businesses meant to them.

The rebrand was announced in early August, on the same day that Mark Stirrup was appointed as managing director of both businesses.

“It included the strapline ‘together we’re better’,” says Stirrup (pictured below). “It was one of the first things that I noticed when I joined, it jumped out at me. I think it’s a great strapline as it resonates on many levels. You can read it in different ways, and they’re all positive.”

“And because there is so much collaborative input, the rebrand has passion and humanity around it. We wanted to make the Corporé name a little quirky as well, hence the accent on the end. It just gives it a little lift and helps people to pronounce it correctly.

“It’s been really well received by the market and even our competitors have told us that we’ve done a really good job out of it.” 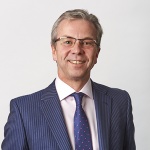 Phase two began with Stirrup’s arrival. With the heavy lifting done to get the businesses back on track, the new managing director has set his sights on fine tuning, to make Corporé and The Treatment Network a “slick, efficient business”.

“We’ve resolved a lot of issues we had around the financial integrity of the business. So now we’re making sure that the financial systems fully reflect the operational systems,” he explains.

Traditionally, the twin organisation has provided end-to-end rehabilitation solutions for all types of injury, from minor to catastrophic for major insurers, some of their claims handlers, and defendant lawyers. It is now also building its capabilities in psychological care and a major incident service, which deals with multi-person tragedies.

“We’re already providing a service for the Croydon tram crash and the Didcot power station collapse. We did a bit of work on the Manchester bombing as well.

“Now we’re looking to provide a much enhanced version of that and we’re becoming the go-to company when there’s been a major incident.”

Stirrup also has his eye on the claimant market, having forged a number of key connections with law firms during his career. Since he started, Corporé has started to bring in a growing stream of multi-track and catastrophic work from some of the largest PI firms in UK.

Stirrup has a background that makes him well placed to continue to steer the rehabilitation businesses towards a new era of success.

He spent 15 years in large-scale outsourcing, particularly in the insurance sector and then moved to Capita as the managing director of Premier Medical – one of Speed Medical’s rivals.

At the same time, he also headed up Medicals Direct Group, which provides medical evidence to the protection insurance market.

“I’d done quite a lot of turnaround activity at Meds Direct and Premier Medical when all the MedCo changes came in. We had to downsize considerably and reduced the headcount by 25% due to the overnight loss of work.”

Stirrup then had to oversee Premier Medical’s eventual exit from Capita, a complicated and protracted affair which involved the medico-legal report provider having to extricate itself from the a number of systems and processes that were shared with Capita.

With Corporé and The Treatment Network on the right track, Stirrup is wary of allowing any complacency to settle in.

“We have to be about clinical delivery, ensuring that people get the right rehabilitation and the right treatments at the right time.

“There are a lot of people out there who get the wrong treatment, particularly the wrong psychological treatment. And if you get that wrong, then that can make the original presentation worse than when it started.

There is also a challenge around cost efficacy at the low end of the market, as Stirrup explains: “There has to be a balance of cost and the value of the rehab itself.”

Although he doesn’t view the current PI reforms as a threat, and expects to see a continuation of insurer third part intervention, he recognises that rehabilitation providers have to keep their eyes open for any future market regulation.

“We all know that with PI reforms the MoJ is on a journey. Where they end up is anyone’s guess.”

In the meantime, Stirrup says that Corporé and The Treatment Network will continue to deliver high quality work, underpinned by excellent governance and a genuine desire to improve injured people’s lives.

“We’re making sure that the passion and humanity that we expect of ourselves comes out in everything we do.”